The lifetime of the cutting edge and therefore of saw chains until the next sharpening and inspection cycle can be significantly increased by using cutting elements in motorized chainsaws made of a laser-welded composite bimetal material. Hardness values of up to 750 HV and tensile strengths of up to 2,500 MPa can be achieved by using quenched and tempered high-speed steel. This makes it possible to use the saw for special purposes such as in emergencies by fire and rescue or for demolition work.

Teilen
Cutting elements in accordance with the invention can be used for saw chains in standard petrol-driven chainsaws, for electrically powered and battery powered chainsaws, or for those with alternative forms of power. By using high-speed steel, which has now become possible for the cutting material, not only resistance to wear and therefore the cutting-edge life of cutting elements can be improved, but on grounds of the improved tooth hardness, the ease of cutting with the chainsaw can be improved appropriately by varying the geometry. In addition, the resultant cutting forces in the cutting elements are significantly reduced on grounds of the low progression of wear on the cutting-edge, which has the effect of considerably increasing the working life of battery-powered chainsaws in particular.

Materials containing metallic foreign bodies can also be cut using saw chains in accordance with the invention, such as nails, screws or clips for example. Saw chains in accordance with the invention are therefore especially well suited to demolition work, structural and civil engineering purposes and in general for rough working conditions. The resilience of the saw chain also delivers a considerable increase in efficiency when using it on large harvesters. 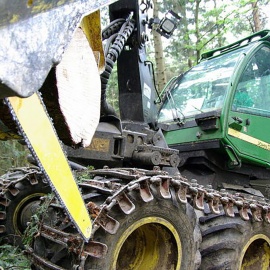 The saw chain with its increased resilience is ideally suited for use on harvesters (Photo © www.mittelbayrische.de) 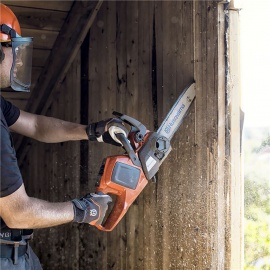 Stamped parts with special features - no problem with our special strip!

Also on Android and iOS:

Please find the direct sales contact according to the different product groups.

Bohlerstrip is a registered trademark of voestalpine Precision Strip Group from Austria.
We transform premium-quality strip steel into tools for cutting and stamping processes that are developed for every application with the utmost of precision.
Links